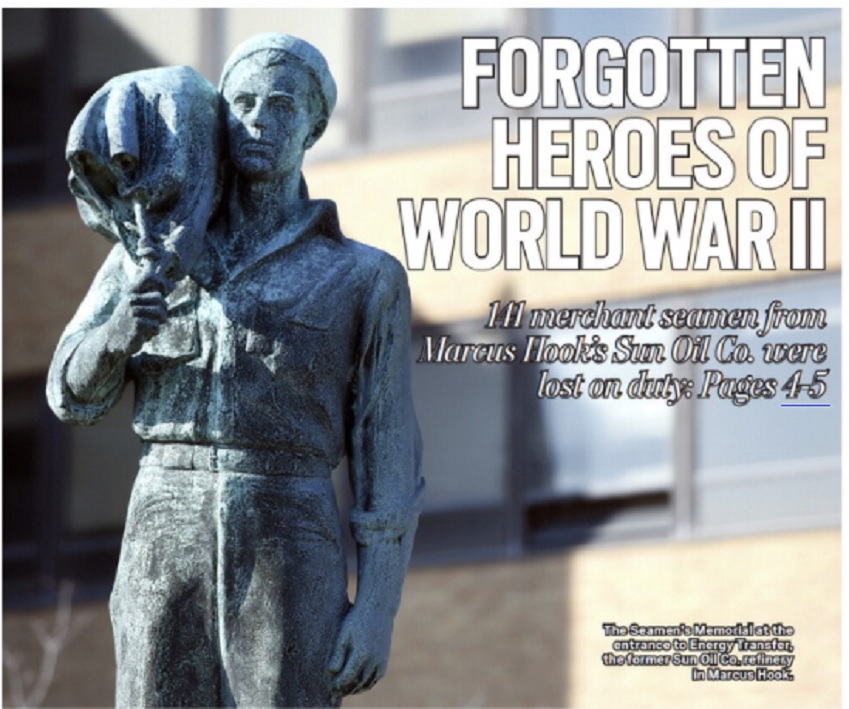 MARCUS HOOK – Just inside the gates of the Energy Transfer refinery, formerly Sun Oil Co., sits a reminder of the impact war brought to Delaware County ports 80 years ago.

On February 21, 1942, the first of nine tankers sailing for Sun Oil’s escape during World War II was hit by a German U-boat torpedo off the coast of Aruba.

America had entered the World War less than three months earlier with the attack on Pearl Harbor and the crew members of Sun Co., based in Delaware County, were in the middle of it.

Ships in the Sun fleet, many of which were also built at Sun Ship in Chester, sailed more than 2,358,000 miles and carried 41,000,000 barrels of oil during the war, according to Sun Oil records.

During World War I, three Sun tankers were sunk by German torpedoes, but there were no casualties.

With the start of World War II in 1939, cargo and supply ships were being chased across the Atlantic and the Caribbean by German U-boats. Off the coast of South America, the island of Aruba was home to two of the world’s largest refineries, and in mid-February U-boats attacked a number of tankers there.

In February 1942, the tanker SS JN Pew, named after Sun Oil founder Joseph Newton Pew, was heading for California. She had been requisitioned by the government along with 16 other Sun Ships when, on February 21, she was torpedoed off the South American coast by U-67. A trpedo hit the port side, causing a fire and forcing the surviving crew to abandon ship.

The surviving sailors escaped in two lifeboats. On the first, there were only two men. They safely reached the shores of Venezuela where indigenous residents brought them back to US forces after four days.

The second boat was not so lucky. With 11 men and limited supplies, they drifted at sea for 21 days before being spotted by a patrol aircraft. Only one sailor, Robert Kelly, 17, was rescued.

During those three weeks, Kelly had seen the others gradually die or jump overboard in madness. He was picked up by a passing Panamanian banana boat. His weight had dropped from 179 to 109 by this time and he told his harrowing story in an Evening Report story told at his bedside.

The sinking of the SS JN Pew killed 33 sailors and over the next four years that number will rise to 141 sailors serving on Sun Oil ships after nine attacks and four ships sunk.

Over the next few weeks three more Sun ships were hit with the loss of one sailor.

In March, the Atlantic Sun, which carried a crew of eight officers, 32 men and five armed guards, departed Beaumont, Texas, bound for Marcus Hook with a load of 156,840 barrels of crude oil and a 5-inch gun and 4.30 cal for defense. .

On March 21, the lone tanker was spotted by the German U-124 but the submarine was unable to get into a favorable firing position due to the tanker’s speed of 15 knots, according to the Uboat.net website. . The captain fired a torpedo which struck on the starboard side in the forward tank but did not seriously damage the ship and the Atlantic Sun reached Beaufort, NC under her own power.

Then, on May 18, the MS Sun was hit near the Yucatan Channel, which connects the Gulf of Mexico to the Caribbean Sea. The ship and six sailors, including the captain, were lost.

In July 1942, the MS Pennsylvania was hit off Key West. Fires raged as crews were forced to abandon ship.

The next day the captain and some volunteers returned to the damaged vessel, extinguished the fire and, with the help of a salvage vessel, were able to have it towed to port.

The Atlantic Sun, with a crew of ten officers, 36 crew, 20 gunmen and one passenger, was hit again on February 15, 1943, after experiencing engine trouble and drifting away from a convoy from the coast of Cape Race, Newfoundland.

It was hit by two torpedoes from U-607 on the port side. The first torpedo split the ship in two and the other ripped a large hole in the bow. The forward section sank within 20 minutes while the after section remained afloat and 22 crew attempted to bring her to port under tension. A third torpedo hit near the stern, sinking her 30 minutes later.

Eight men escaped in a half-submerged lifeboat without oars. Others went overboard into the sea just before the ship capsized and sank. One sailor, William Golobich, survived and was taken prisoner by the submarine. He was eventually taken to the Marlag und Milag Nord POW camp. The others perished at 25°.

In these same waters of the North Atlantic, the MS Sunoil was hit on April 5, 1943 with the loss of the entire crew, 43 men.

These details again come from the Uboat.net site.

At 11:45 a.m. on April 5, 1943; U-563 fired three torpedoes at the Zigzag which was drifting away from a convoy due to engine trouble. A torpedo struck, but armed guards forced the submarine to dive and its distress signal brought the British destroyer HMS Vidette to the scene.

A few hours later, U-530 spotted an oil tanker and fired three torpedoes at Sunoil, which was hit by one torpedo and stopped. The tanker sank rapidly after being hit by the second and third torpedoes. All ten officers, 33 crew and 26 armed guards were lost.

On January 2, 1945, the ninth ship Sun saw the tragedy of war off Sandy Hook, NJ, when it exploded for unknown reasons, 10. Ten men lost their lives. The ship sank but was later recovered by the Sun Marine Department.

To remember the sailors, the Sun Seamen’s Memorial at the entrance to the Marcus Hook refinery. It was funded by employee and Sun Oil donations.

On October 9, 1949, Helen Calvarese covered the dedication of the monument for two hours for The Chester Times. She wrote that 3,000 people attended, including the United States. Senator Edward Martin, Congressman Benjamin F. James and JN Pew Jr., Chairman of the Board of Sun Oil Co., who presided over the memorial services. They were broadcast on radio stations WCAU, WPWA and a television network.

Pew listed some of the achievements of Sun Tankers and Honored and Added Tankers,
“Sun sailors sailed in all theaters of war – to Greenland, Iceland and Scotland in the treacherous North Atlantic, the Mediterranean, Russia and the Persian Gulf, Australia and many islands in the Pacific. “

In total, he recalled, Sun tankers traveled more than 2,000,000 miles and transported 41 million barrels of aviation gasoline and other petroleum products.

During the services, a Coast Guard white cutter remained anchored in the middle of the river and five Sun Oil tankers, Mercury Sun, MS Sun, Southern Sun, American Sun and Louisiana Sun, were moored at Sun Pier. Ships wore their flags at half mast.

“We members of the commission,” he said, “know very well that without the courage, bravery and patriotism of those, living and dead, who manned the tankers, the Second World War would probably have been lost and civilization plunged into an era of darkness and despair.

The climax of the services came with the unveiling of the towering 9-foot bronze statue of a merchant sailor standing with his duffel bag slung over his shoulder and his eyes gazing out to sea, Calvarese wrote. When the blue bunting was removed from the bronze figure by Mrs. Joseph Pew Jr., (Alberta), muffled sobs were heard in the crowd.

Memorial wreaths were placed at the base of the new statue by four survivors of torpedoed ships – Robert Kelly, Orla Bowhall, Fred Godin, Marcus Hook and Charles Felnman of Brooklyn.

The program had not requested a wreath laying by Mrs Stitcheson, but when she arrived at the last moment she brought her own wreath in memory of her son, Andrew Stitcheson, who was lost with the JN Pew. She was allowed to walk to the newly unveiled statue before the others, Calaverse reported.