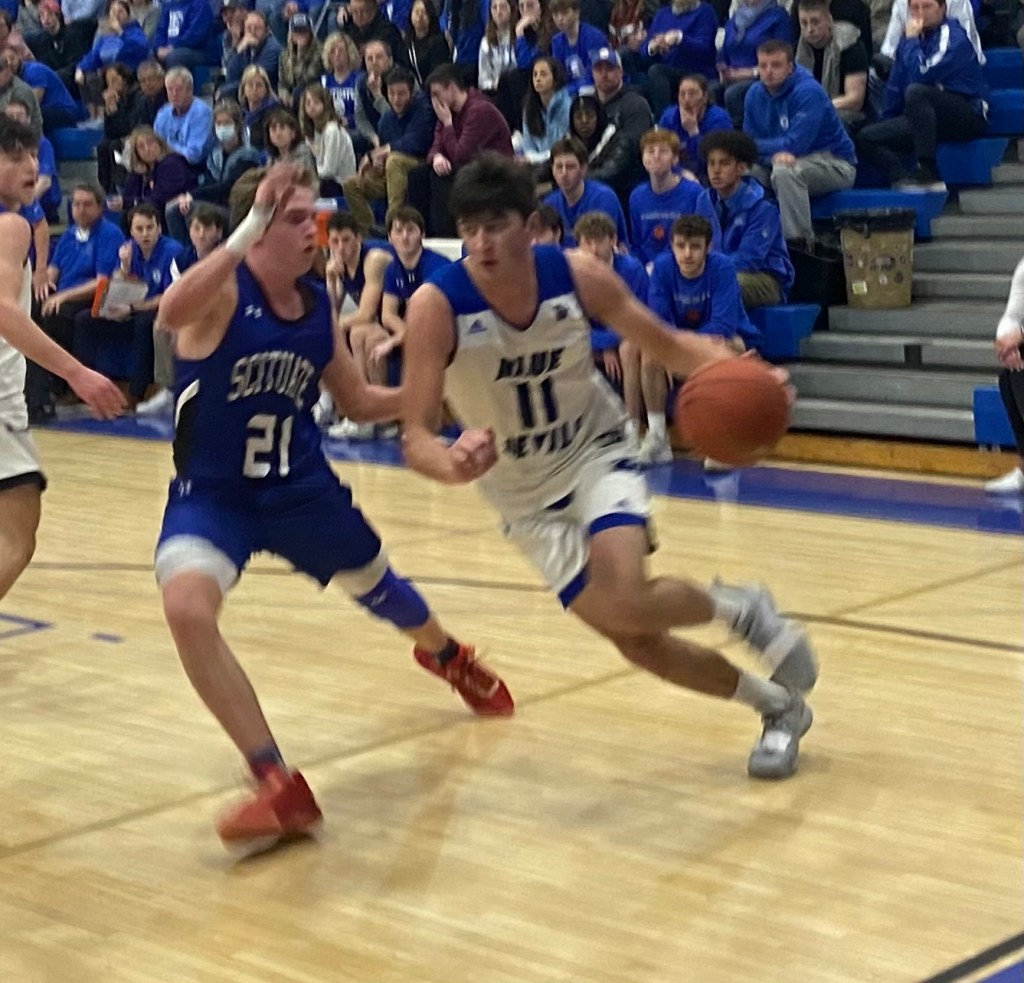 LEOMINSTER – The warm-ups were nothing spectacular. There was no indication of what was to come.
But once the whistle sounded to start Tuesday night’s Div. 2 second-round men’s basketball game, the hoop had to look 10 feet wide for Scituate High.

The 13th-seeded Mariners were hot from wide early and held on late to upset No. 4 Leominster, 61-57.

The Sailors (17-5) host number 28 Wakefield on Friday in the quarter-finals, while Leominster’s season ends at 15-5.

“We have 10 seniors in this team and we didn’t want this to be our last game,” said Scituate senior goalkeeper Keegan Sullivan. “(Leominster are) a good team and a hostile place to play, but we came out ready to go.”

Michael Porter led Scituate’s effort with 14 points, while Sullivan had 12 and Samuel Benning with 11.

Leominster was paced by Warren Acceus, who had a game-high 15 points. Alex Moison added 12, Justin Dadah had 10 and Kevin Viola scored nine.

Scituate led almost from start to finish, hitting eight 3-pointers in the first half to establish a 35-26 lead after 16 minutes of play.

“You have to give Scituate credit; they took a two-hour bus ride and got out and shot like that,” Leominster head coach Kevin Grutchfield said. “They came out and hit some big shots and really set the tone.”

Brady Burns gave the Sailors the biggest lead of the game late in the second quarter, draining a deep 3 to give the guests a 35-20 advantage before Leominster closed on a 6-0 run, with four points coming from of Accus.

“We knew we had to come out of the gates strong against a team like Leominster,” Scituate head coach Matthew Poirier said. “They’re a tough team and they’re well trained, so we had to get off to a good start.”

Leominster made things interesting in the second half, cutting the lead to 48-43 after three and going even closer in the final eight minutes. Down 56-48, Acceus drained a 3 then headed for the basket, bringing the hosts within three with 2:11 remaining.

But Scituate had an answer, as John Kinsley hit his own 3 with 1:44 to go on the clock.

“Tonight was one of those nights where we would make a run and get close but then we would miss a big shot or they would hit one,” Grutchfield said. “I’m proud of the effort. We have just been beaten by a team that was better tonight.

Acceus cut the lead to three again, 60-57, with 10.6 seconds left, but it was too little too late as the Sailors knocked down one of four free throws in the final 10 seconds to close the game.