Welcome to the Summer Comics Binge of “Sailor Moon” manga, today we take a look at the final chapters of the main series itself. All of Usagi’s Sailor Guardians and her beloved Mamoru were killed by Galaxia and her minions. Along with the Sailor Starlights, Princess Kakyuu, and Sailor Chibi Chibi, our heroine flies to the center of the galaxy, where she hopes to recover Sailor Crystals from her fallen friends and end the fighting once and for all.

Created by Naoko Takeuchi
Translated by Alethea Nibley & Athena Nibley
Letters from Lys Blakeslee[Official blurb is the same as the previous volumes. (“Teenager Usagi is not the best athlete, she’s never gotten good grades, and, well, she’s a bit of a crybaby…”) This volume also contains the stories ‘The Secret Hammer Price Fall’ and ‘Parallel Sailor Moon,’ which we’ll cover at a later date.]

‘Act 56. Stars 7:’ Usagi’s journey becomes rather Dante-esque, as her party is greeted at Sagittarius A* by a giant doorway and the Charon-esque Sailor Lethe. She carries them across a river, until the waters consume them, depositing Usagi in a world where she does not remember who she is. (For the record, Lethe is the underworld’s river of oblivion in Greek mythology.) Lethe tries to persuade her to embrace Galaxia’s nihilism, demonstrating that nothing matters with a vision of her killing Luna, Artemis and Diana. This part really crystallizes the theme of the story, namely how we react to change, whether it’s the inevitability of death or (more precisely for the target audience) the end of an era and the friendships we once had: basically, just because nothing is permanent, it doesn’t mean that everything (love, friendship, kindness, etc.) is as useless as Galaxia thinks it is. 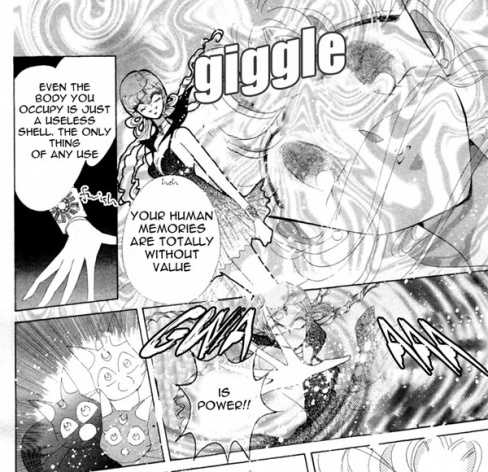 Sailor Lethe kills the cats (scan of an earlier translation)

Meanwhile, in the 30th century, Chibiusa defies her mother’s wish to stay, and the Sailor Quartet reveals themselves to accompany her to the past; Neo-Queen Serenity proudly responds to her daughter’s bravery and independence by giving her a space-time key. Back in the present, Lethe’s sister Mnemosyne (whose name is that of the river and the goddess of memory) attempts to persuade her to spare Usagi, claiming that Galaxia will decide her fate. Usagi, remembering who she is, states that she is not here to fight, but Lethe replies that her presence invites Chaos anyway; our heroine tells him to kill her then, calling Lethe’s bluff. The sisters leave, only to be attacked and killed by Sailor Chi and Phi for being “useless”. The two then claim the Starlights’ Comatose Crystals.

‘Act 57. Stars 8:’ Usagi, Kakyuu, and Chibi Chibi are confronted by Sailor Heavy Metal Papillon, who is defeated by Chibiusa and the Quartet’s intervention. Chibiusa tells Usagi that the vision was real, as the cats were nowhere to be found on Earth, but a light guided them there. Lots of welcome comic relief ensues, as Chibiusa meets Chibi Chibi, who is supposed to be the source of the light: the Crown Princess is shocked at the thought of having a younger sister, then (very understandably) flustered when the speculation turns to the little Guardian being his daughter. 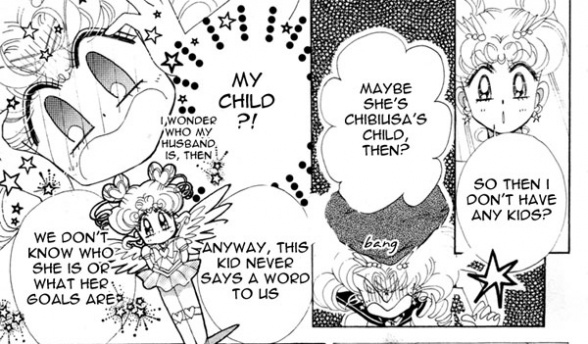 (Scan of an earlier translation)

Inanity points out that there’s more to Chibi Chibi than just this simple. Chi and Phi reappear and are also defeated, but not before one of them jumps on Kakyuu and mortally wounds her. Usagi angrily swears that Galaxia won’t take Kakyuu’s crystal, but her body also disintegrates, as it’s captured by… Sailor Venus.

‘Act 58. Stars 9:’ Zombified versions of Mamoru attack and Earth’s Sailor Guardians. As Chibi Chibi gives Chibiusa a vision of their deaths, indicating that they are not her loved ones, Usagi finds herself unable to defend herself against this horrific teasing, leaving her daughter and the Quartet powerless against the more experienced Guardians. When her “friends” brutally beat her, destroying her wings and scepter, Usagi finally accepts the truth and stands up, magically repairs the scepter, and destroys it again. Galaxia finally shows up and stirs salt in Usagi’s wounds by having “Mamoru” kiss before punching him. She and Usagi take care of each other.

‘Act 59. Stars 10:’ Usagi and Galaxia’s battle leads to the Evil Empress throwing all the Crystals into the Galactic Cauldron, along with Mamoru, wiping Chibiusa from history. She explains that feeding the cauldron will awaken the darkness lurking within, which will then be destroyed once it consumes Sailor Moon, allowing Galaxia to claim the cauldron. Presumably overhearing it, Master Chaos strikes Galaxia, forcing Usagi to save her. Chaos is revealed to be a Starseed that failed to become a star or a planet, and that Metalia, Death Phantom, Pharaoh 90, and Queen Nehelenia were also Dark Stars, or “extensions” of herself, explaining why all of the series’ overall villains looked so much alike. 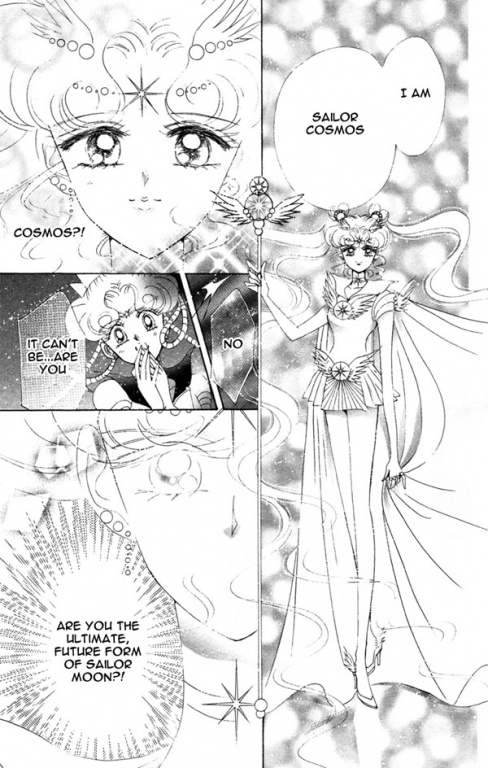 Chaos declares that the Silver Crystal Light will finally be theirs. Usagi becomes fatalistic, believing this is the end of the Guardians, and letting Chaos consume everything will be fine if it means the fighting will stop. Chibi Chibi begins to speak fluently and implores him to fight, pointing out that life will always be full of darkness and light, so it’s naive to think that giving up here will lead to the end of any conflict. Goodness, that’s a complex pep talk, isn’t it? The blurring of the speech captions doesn’t help either, although at least it’s not as wordy as some Japanese comics.

Stunned by Usagi’s act of kindness, Galaxia listens to her sister-in-arms accept Chibi Chibi’s wisdom and reaches out to her, but her crystals shatter and shatter, causing her to disappear as well. Before flying off to overload Chaos with her light, Usagi tells Chibi Chibi not to lose hope in her future. Chibi Chibi transforms into an adult with an uncanny resemblance to Usagi and kisses her goodbye. As Usagi plunges into the abyss, she wonders if Chaos and all of its extensions have been driven mad by loneliness like Galaxia was, and declares that she will save everyone by kissing her.

‘Act 60. Stars 11:’ Usagi channels all the crystals to incinerate Chaos with herself. The Unconscious Quartet awakens and is greeted by Chibi Chibi, who explains that she is Sailor Cosmos, Usagi’s counterpart from the far future: she went back in time to prevent the creation of a Galaxia-like Guardian named Sailor Chaos. She describes herself as a coward for making this decision and declares Usagi to be the real Sailor Cosmos, before sending the girls back to the future.

At the heart of the cauldron, Usagi is reunited with all of her loved ones and is greeted by the Guardian Cosmos, who recalls her mother’s visit all those years ago, which led to Usagi’s birth. She asks him if they want to be reborn, or go back to their old life: Usagi chooses the latter, of course. Before Usagi remembers to ask what happened to Chaos, Cosmos sends them on their way: the Guardian comments that the shadow might reappear one day, though their essence is too small to find. 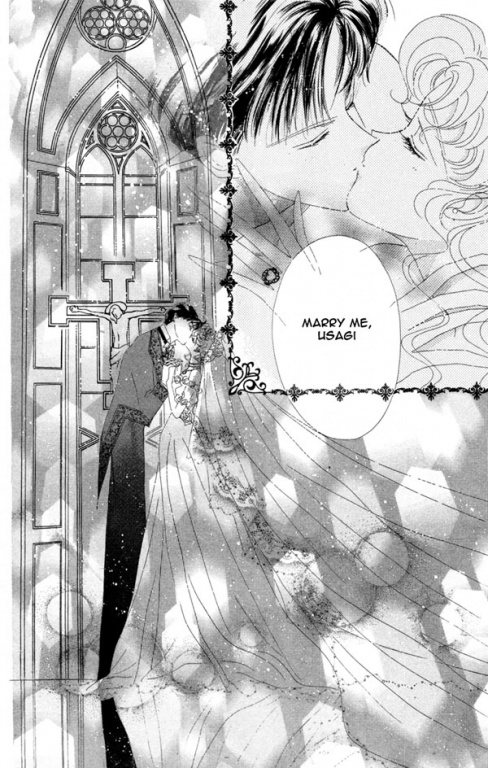 We fast forward to Crystal Tokyo, where Usagi wakes up in bed with Mamoru and asks him to propose to her again. We cut to a church wedding, where Usagi can feel Chibiusa kicking (so to speak.) The inner and outer guardians are all bridesmaids, while Mamoru has the final say, telling us how his bride is the brightest star for all eternity. . When this series started, Usagi was an anxious underachiever, so it’s amazing to hear her husband describe her that way, and I guess that’s the secret power of love: that relationships will enlighten you on the light that you are among your friends. , partners and family life.

This arc was a dazzling and shocking end to the series, which demonstrated how much I cared about the characters by leaving myself shocked, angry, and overwhelmed by the constant carnage. I have quibbles, like how quickly the Starlights are written, the aforementioned pontificate over fights that every anime seems to suffer from, and the fuzziness of the epilogue, which doesn’t clarify the fate of the cats or the human family of ‘Usagi (if any The series deserved an extra wedding number, it was this one.) Either way, it was an epic and often jaw-dropping finale, and I hope it wows similarly many more fans who thought they knew “Sailor Moon”, when the Cosmos movie releases.

See you next week for the prequel, “Codename: Sailor V.”