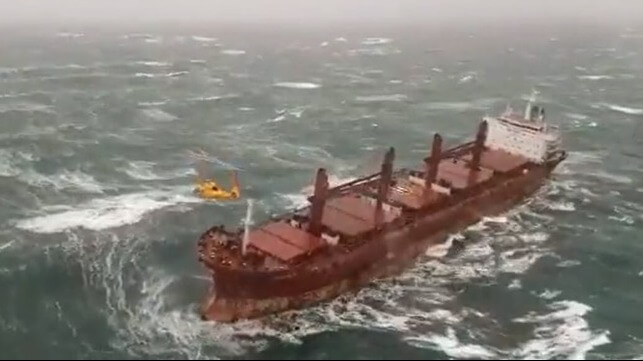 Dutch and Belgian rescue services have managed to remove 18 crew members from a Maltese-flagged bulk carrier which was drifting off the Dutch coast after colliding with a chemical tanker and a foundation at a wind farm. Reports indicate that the second of two severe winter storms was moving through the area, causing the bulk carrier to lose its anchor and possibly its rudder.

The Dutch coastguard says the accident happened in the late morning in the Ijmuiden anchorage, a busy area where ships usually rest offshore near Amsterdam. Nine-year-old bulk carrier, the Juliet D, had been at anchor since January 23, arrived from Germany. Winds were blowing up to 75mph this morning with high seas when the ship reportedly lost its anchor and was drifting out of control. The bulk carrier, which is 37,200 dwt and 623 feet long, was later reported as missing a rudder.

the Juliet D first contact with the chemical tanker at anchor Star of Pechora. The 13,000 dwt tanker arrived at anchor yesterday, January 30, from Germany. the Star of Pechora maintained her anchorage but suffered some damage when hit by the bulk carrier. However, the Coast Guard reported that the situation on board the tanker was stable.

The bulk carrier, however, continued to drift and reportedly took on water after hitting the tanker, prompting the decision to evacuate the vessel. Two Dutch helicopters were dispatched as well as a coast guard patrol boat and they also asked for help from the Belgian coast guard who sent one of their helicopters. The operation took about an hour to hoist the 18 crew members from the overhead crane of the bulk carrier. 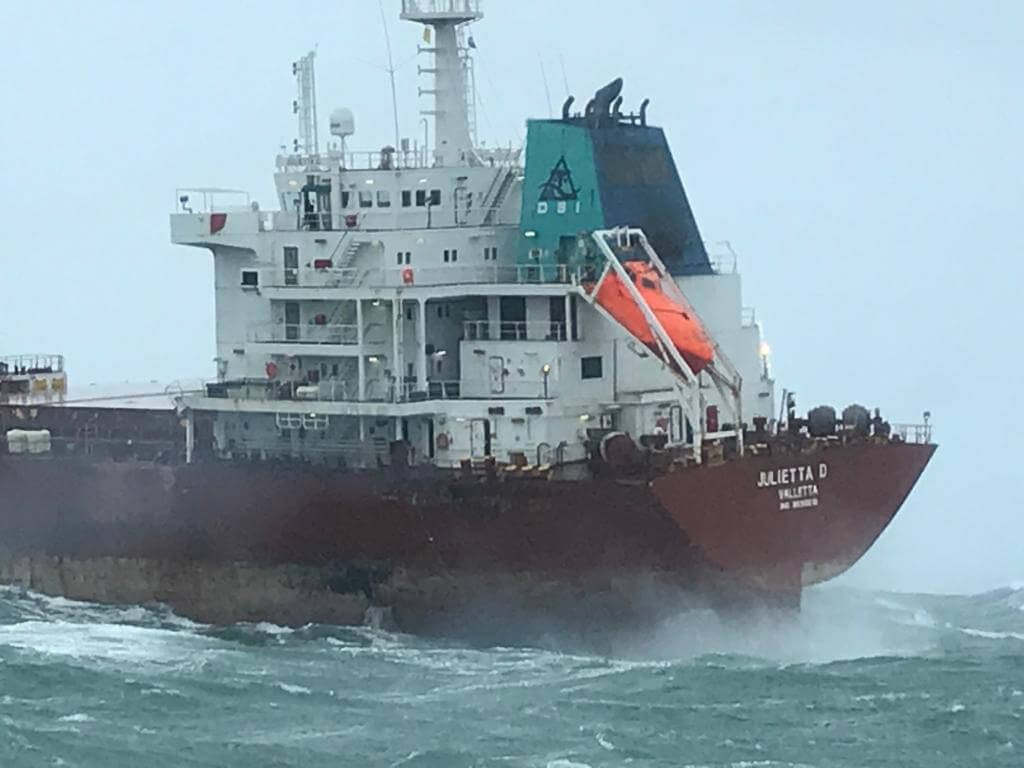 the Juliet D continues to drift and roll in the storm entering the area of ​​the Hollandse Kust wind farm currently under construction by Vattenfall. The Netherlands Coast Guard reported that the vessel had struck one of the foundations of the wind farm, but it appears that the wind turbine had not yet been installed on the foundation.

Late in the day, the Coastguard said arrangements had been made with the owners of the bulk carrier for a salvage team to attempt to tow the adrift ship. The Coast Guard was preparing to airlift a crew to the ship to help secure the trailer.