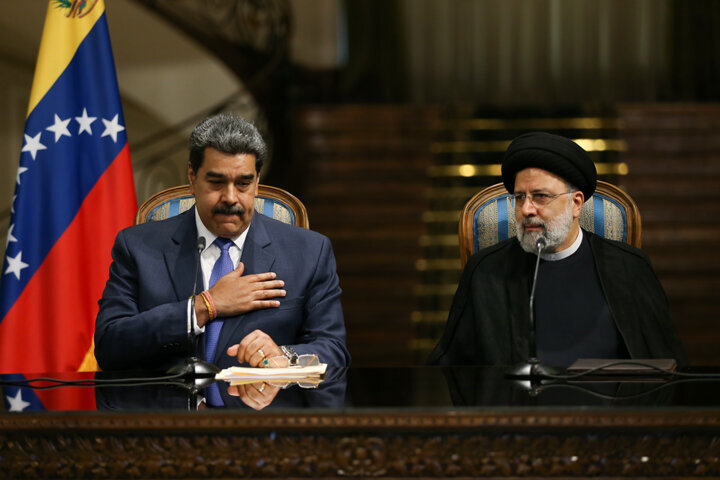 TEHRAN — The fact that Iran succeeded in building oil tankers for Venezuela shows that the economy of resistance adopted by Iran has proven effective, President Seyyed Ebrahim Raisi has said.

Raisi made the remarks as Iran delivered the Aframax II tanker to Venezuela in a ceremony on Saturday while the country’s President Nicolas Maduro was visiting Iran.

The tanker, the second of its kind, is being built by Iran’s Marine Industrial Company (Sadra).

Speaking at the handover ceremony, Raisi said, “We sincerely thank the Sadra company and everyone involved in the manufacturing of the tanker.”

The delivery of the 113,000 ton tanker built by Iranian engineers and the shipbuilding industry in Venezuela is an example of Iran’s great capacity and ability to export as the enemies of Iran and the Venezuela are trying to impede the progress of the two free nations by imposing harsh restrictions and harsh penalties, Raisi said.

He then reiterated that the delivery of the tanker to Venezuela portrays the capability of Iran’s technical and engineering services to the world, as well as proof of the effectiveness of the resistance economy model.

“The construction and delivery of this tanker, which has also been approved by the Venezuelan Technical and Engineering Group, will not only help the Venezuelan government achieve its goal of independence in maritime transport, but will also prove that the will and the unity of combatant and revolutionary nations and governments is far stronger and more effective than US sanctions,” Raisi noted.

The President went on to say that on the other hand, Tehran and Caracas, as two complementary and interdependent economies, will be able to advance towards the well-being and development of their nations by complementing and linking the supply chains of the two country.

“This kind of joint cooperation is a good model for all developing and independent countries to see that great things can be achieved through cooperation and interaction,” he noted.

Raisi then pointed out that two more tankers are under construction, expressing hope that they will soon be ready for delivery to Venezuela.

Maduro: Iran is one of the emerging powers of the 21st century

For his part, the Venezuelan President praised the construction of the tanker and said: “Seeing this ship with a capacity of 800,000 barrels, the first thing that came to my mind was the face of our beloved leader, Commander Chavez, who I’m sure his soul smiles wherever it is.

He then noted that the construction of the tanker for the Venezuelan state oil company was the late leader of Venezuela, Hugo Chavez’s plan to strengthen Caracas’ oil industry and make it self-sufficient in the face of all foreign aggression.

Speaking to his Iranian counterpart, the Venezuelan President said on behalf of the Venezuelan people and all the men, women, employees and workers of the National Oil Company of Venezuela, that he wanted to thank the Iranian engineers for the delivery of this ship, calling it a “great achievement.”

The Aframax II tanker is the second vessel Venezuela has ordered from Iran in recent years. According to the contract, two more tankers will be delivered to Iran after construction.

Venezuela previously struck a $240 million deal with Iran to buy four ships each, and now it has received a second vessel.