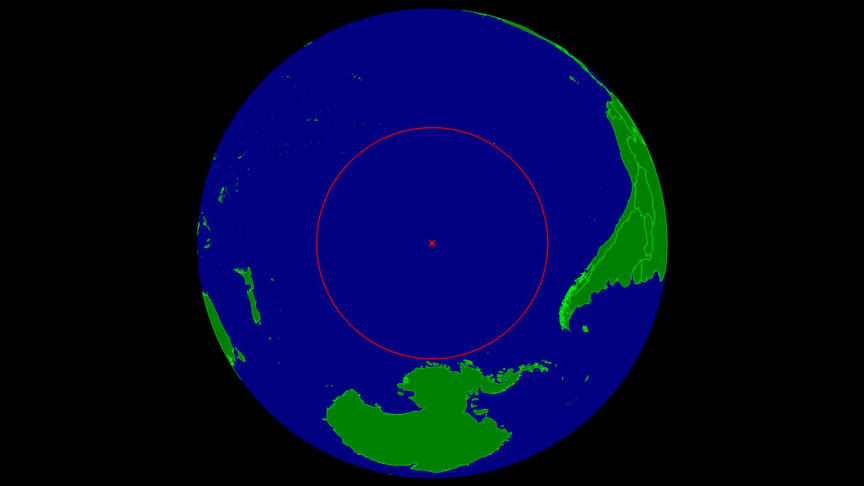 Point Nemo is the most remote place on Earth – the furthest place on earth.

It is located in the South Pacific Ocean and stretches around 2,688 kilometers (1,670 miles) from nearest land.

It is called “Point Nemo” because “nemo” means “person” in Latin. It is also the name of Jules Verne’s fictional character, Captain Nemo, who travels the oceans in his submarine, Nautilus, in Verne’s science fiction adventure novels. Twenty thousand leagues under sea (1870) and The mysterious island (1875).

Point Nemo isn’t just in the middle of nowhere, it’s also a spaceship graveyard: the place where NASA and other space agencies crash their de-orbited satellites, space stations, and other decommissioned spacecraft.

1. The ocean pole of inaccessibility

Point Nemo is also called the ocean pole of inaccessibility.

This means that it is the place on the ocean that is farthest from any land. A pole of inaccessibility refers to a place on Earth that is most inaccessible to reach according to established criteria. On land, it often designates the farthest point of the coast.

Poles of inaccessibility include:

All these islands are uninhabited. To find civilization, you must go to Easter Island (Rapa Nui) – one of the most remote inhabited islands in the world, about 2,200 miles (3,540 kilometers) east of Chile – or in New Zealand, about 2,500 miles (4,023 kilometers).

As there is no airport at Point Nemo, this trip can only be done by boat and can take over two weeks.

In the meantime, the closest humans to Point Nemo are often the astronauts aboard the International Space Station (ISS), who, when passing directly over Point Nemo, are approximately 258 miles (415 kilometers) away – much closer than any other human being. on Earth at that time.

The location of Point Nemo was first calculated in 1992 by Croatian-Canadian surveying engineer Hrvoje Lukatela, based on “digital map of the world” data compiled by the US Defense Mapping Agency (this is now the National Geospatial-Intelligence Agency). Lukatela used calculation software to give a numerical resolution of about 1 mm.

It is clear that there is no human life near Point Nemo. Well, there doesn’t seem to be much sea life either. Point Nemo’s location sits at the center of the South Pacific Gyre, a rotating ocean current that pulls nutrient-rich waters away from the area.

The enormous distance between Point Nemo and land also means that nutrient runoff from coastal waters does not easily reach the area. The sea creatures that would otherwise make their home near Point Nemo simply don’t have the food to thrive there.

The researchers found only bacteria and small crabs living in the volcanic mouths of the seabed around Point Nemo.

However, there is pollution. In 2018, up to 26 microplastic particles per cubic meter were found in seawater samples collected near Point Nemo by passing ships.

5. The House of Cthulhu

Point Nemo’s location is coincidentally close to that of R’yleh, HP Lovecraft’s fictional sunken city, where the Cthulhu entity is buried.

The fictional sunken city was first mentioned in Call of Cthulhu (1928), a short story written 66 years before Point Nemo was calculated.

In 1997, researchers from the US National Oceanic and Atmospheric Administration (NOAA) detected ultra-low frequency sound near Point Nemo that they could not explain. They called it “the bloop”.

H P. Lovecraft fans were quick to associate the sound with Cthulhu. Even though there isn’t much biological activity near Point Nemo, some scientists have speculated that it was actually the call of an unidentified sea animal.

In 2005, it was finally discovered that the sound was produced by a non-tectonic ice quake due to glacial movements in Antarctica.

Space agencies have found that an extremely isolated location like Point Nemo is a safe “scuttling” site for satellites and spacecraft that are de-orbited back to Earth at the end of their useful life. By using controlled landings, space agencies can deliberately splash down decommissioned spacecraft in this remote region without affecting people or ship traffic in the process.

Reportedly, space agencies began using Point Nemo as a spacecraft graveyard in the 1970s, even before the area was named “Point Nemo.”

Many small retired spacecraft disintegrate and burn up when they re-enter Earth’s atmosphere, but if they’re too big to burn up on their own, they’re intentionally crashed at Point Nemo – an area that escapes legal jurisdiction of any country. The purpose of deorbiting is to prevent space debris from colliding with operating satellites or manned spacecraft in low Earth orbit. Using Point Nemo also ensures that no person or object will be harmed by the desorbed debris.

Other space debris in the Point Nemo spacecraft graveyard includes craft belonging to the European Space Agency (ESA) and the Japan Aerospace Exploration Agency (JAXA), about 140 Russian supply vehicles and a rocket SpaceX. The International Space Station (ISS) is expected to crash at Point Nemo during its retirement in 2028-2030.

However, as spacecraft break up on impact, their remains can be scattered across up to 995 miles of ocean.

It is also important to note that the disposal of space debris at Point Nemo can also have an environmental impact. Although spacecraft are mostly constructed with non-toxic metals like stainless steel, titanium, or aluminum, some rRadioactive substances and hydrazine, a highly toxic rocket propellant, are believed to survive re-entry and may cause marine pollution at Point Nemo through chemical spillage.