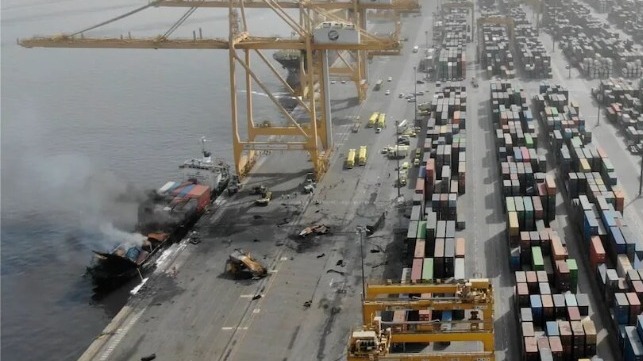 On June 27, 2021, three containers of organic peroxides arrived in Jebel Ali from China and were stored in a terminal yard. Organic peroxides are a known hazardous cargo with a risk of thermal runaway, and summer temperatures in Dubai are high. More than a week later, on the night of July 7, the containers were loaded on board the Trader. One of the containers began to smoke and exploded aboard the vessel shortly after being hoisted onto the deck. The blast was heard across the emirate and five were lightly injured, prosecutors said.

Although the cargo had just been loaded and the initiating events occurred at the dock, local prosecutors brought charges against the ship’s captain and four crew members for the explosion. Prosecutors argued that the captain’s responsibility for securing the containers made him liable, even though he played no role in the open storage of the cargo. The Dubai Criminal Court found that the container involved in the blast had been left in the sun on shore for 12 days, causing the cargo inside to decompose and heat up, and said the five crew members guilty.

The captain denied that he would have accepted the cargo if he had known how it had been stored, and noted that he had evacuated the ship safely and informed the authorities when the dangerous containers began emitting fumes, according to the National.

Five companies linked to the vessel and the expedition were also fined $28,000 each.