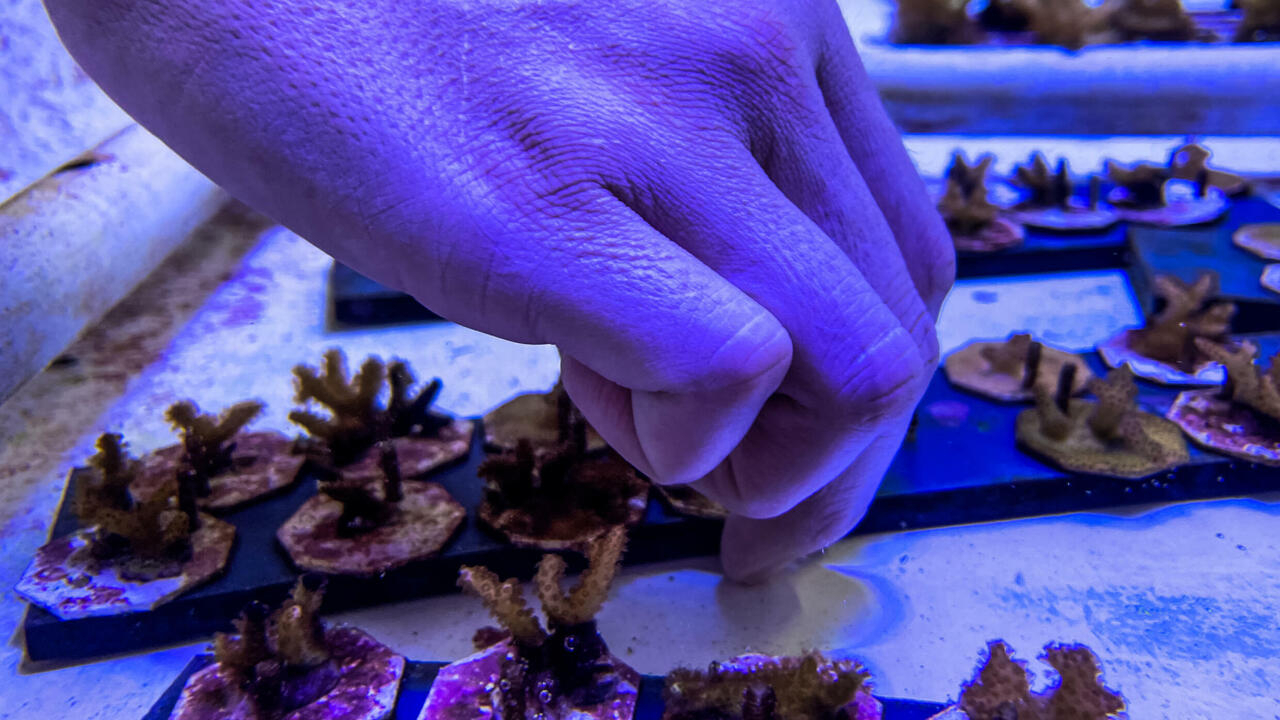 Miami (AFP) – A little bit of coral sparkles like gold in a U.S. lab as part of urgent work to help the species protect itself from climate change, an effort even skeptical experts see sadly justifiable.

Researchers in Florida are aiming to determine whether coral can be saved from rising water temperatures and acidification by transplanting stem cells from resistant varieties to those more vulnerable to climate impacts.

In other words, concerns about global warming have reached such a point that scientists are attempting to alter the genetics of certain organisms so that they can survive.

“Reefs are dying at an alarming rate and they are unable to keep up with climate change,” Nikki Traylor-Knowles, who heads a team at the University of Miami working on the coral, told AFP.

“At this point we just have to try everything and see what works,” she said before nations gathered at the COP26 summit in Glasgow – seen as a last chance to stop catastrophic climate change .

The research in Florida is one of a handful of efforts supported by Revive and Restore, a nonprofit based near San Francisco that views genetic engineering as a valuable tool for environmentalists working to save plants and animals. of disaster.

Organisms on Earth have survived long term by gradually evolving or moving to places where the earth, habitat, or temperature are more hospitable. Climate change is changing the environment too quickly for it to work.

“We don’t have time to evolve to help species make this kind of adaptation,” Ryan Phelan, co-founder of Revive, told AFP at a conference in California.

“We are going to have to intervene, or we have to let it go,” she said.

These push many species of corals – often nicknamed the â€œtropical forests of the oceansâ€ for their rich biodiversity – beyond their tolerance limits.

With pollution and dynamite fishing, global warming wiped out 14 percent of the world’s coral reefs between 2009 and 2018, according to a Global Coral Reef Monitoring Network survey, the largest ever.

More than half of an $ 8 million Catalyst Science Fund to support biotechnology tools to help solve conservation’s most intractable problems goes into coral projects.

“Our thinking is that the tools we are developing for coral will be generalizable to other marine species,” said Bridget Baumgartner, who coordinates coral projects at Revive.

“We hope we can easily translate them into kelp, oyster, starfish, whatever.”

Genetic projects supported by Revive and Restore elsewhere in the United States have resulted in a black-footed ferret named Elizabeth Ann, cloned from decades-old frozen cells, which could be the salvation of her species.

And a yearling named Kurt being groomed at a California zoo is a resurrected wild horse from Przewalski, which had gone missing.

While neither is linked to climate change, the existence of the creatures is key to the group’s argument for their genetic work.

Still, he considers saving species, including coral, from decimation to be a worthy use of technology.

â€œI’m a fan of this approach, if done carefully, with proper regulation and caution,â€ Greely said of adding genetic technology tools to conservation efforts.

Gregory Kaebnick, a researcher at the Hastings Center bioethics research institute, also supported creature protection adjustments, and noted that the risk of a creation going wild was lower than simply failing to make lasting changes. and efficient.

“I’m not excited about the prospect of changing the corals to let them survive, but maybe it’s something we need to do,” he added.